But first things first, anyone who hasn't already should absolutely be getting Grids for Good, the charity pack organized by Evan Birnholz and released earlier this month to raise money for COVID- and racial justice-related charities.  Showing a receipt for a donation of $10 or more gets you 42 puzzles, from some of the best constructors in the game.  I was also included in the pack, presumably due to some sort of oversight.  Honestly, it's a great cause, and I'm really proud to have been part of it.  Plus, if you're really feeling the lack of in-person puzzle tournaments, my The Vine Comedy puzzle may give you some of that feeling of drinking and playing Celebrities at the bar---the theme came together way better than I expected, so I hope it gets a laugh!

For anyone who doesn't know, "cheater squares" refers to black squares in a crossword that could be removed without changing the total number of words---it can make a particular spot easier to fill by shortening two entries and making it so they don't have to cross.  As long as the puzzle isn't way too heavy on black squares already, they can really help to smooth out some fill.  But...they sound kind of bad?  So there has been a bit of a campaign recently to give them a new name, like "helper squares," so that newer constructors don't feel pushed away from or judged for using them.  Since this post is about games, I'll suggest we call them Corner Nerfs!

Cheater squares need to be rebranded to make them more socially acceptable. There should be no shame and they often make the puzzles better.


But this puzzle?  Oh, yeah, this puzzle's themers are definitely cheating.  Brainstormed the idea with Lily Geller, who assured me that---Contra my instinct---this theme is not, in fact, super-dumb.  But it is most definitely niche, which is why it would be ridiculous at any publication or outlet, and perfect for the blog.  Given the theme, this will probably play a lot easier for folks who know a bit about (classic) video games, so thanks to test-solvers Jesse Lansner and Nate Cardin for their notes on how to smooth out parts of the solve.  The final version could be a bit of a workout for video game agnostics, but hopefully still fair and fun, so it's allowed to be a little tough.  If you have trouble, just take the puzzle out and blow on it, that usually works. A couple fun spoiler facts I can't help sharing---hidden behind spoiler links, so don't click or hover until after you've solved!  17-Across has shown up in a bunch of tech and pop culture homages over the years, including this song from nerd-rock band Kirby Krackle.  And while 38D hasn't been around for any recent consoles, it's legacy actually includes a famous copyright litigation.  Boom, nerded and lawyered. 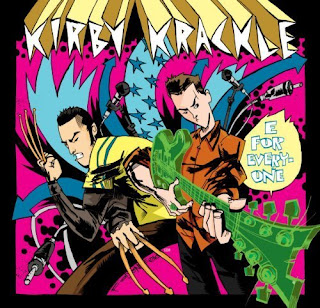 Additional fun fact: I almost included album
art that had 66-Across right on the cover

Also, I'm experimenting with embedding an applet, just to test if it works. EDIT: After experimenting with it a bit and getting some initial feedback/assistance, I think the applet or PDF will be the easier way to solve this particular puzzle.